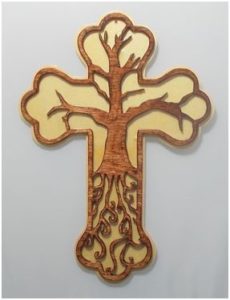 Lovingly tended by successive generations of faithful parishioners and dedicated clergy, St Martin’s Parish first took root in the years immediately after the first  world war. At that time land west of what is now Churchill Avenue featured small holdings and farms .The Parish Church of the day was  All Saints mission church adjacent to the Nepean Town Hall built in 1889.  Trekking from afar to attend worship there was proving increasingly difficult especially in winter.  In 1923 parishioners led by Mr. Fred Pooler and supported by the Reverend R.M. Stacey sought and received agreement from Bishop Roper to erect a new church with funds raised for its construction and the purchase of land at the corner of Woodroffe and Byron. 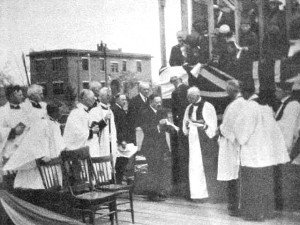 Known as the little brown church, St Martin’s was built by volunteer labour and held its first worship service on May 31, 1925.  By 1927 St. Martin’s was established as an independent mission parish with the  Reverend  W.B Morgan appointed as the first rector with Charles Compton  and Fred Pooler serving respectively as the first Rector’s Warden and as the People’s Warden.  With the onset of the depression in 1930  it was no small miracle that St. Martin’s was debt free. It was the Reverend. Morgan who had the pleasure of burning the mortgage in 1929 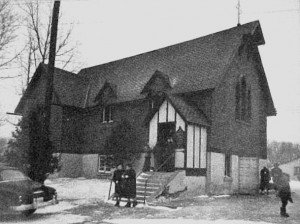 Throughout the late 1940’s early 1950’s the burgeoning growth of suburbs with their influx of church going families found St Martin’s bursting at the seams and equipped to become a self supporting parish capable of rendering support to other mission parishes and meeting the needs of the community. By 1954 the need for new premises was clear. St. Martin’s congregation had grown to over seven hundred families with more than two hundred children regularly attending Sunday school. Three Sunday services were needed growing to four in later years

A handsome rise of land  on an acre sized lot situated where Prince Charles Road meets Lockhart Avenue was chosen as St Martin’s new site. The campaign  funding goal of $75,000– more than $685,000 in current dollars – was met and exceeded: a testament to the prayerful caring of parishioners of the day.

In the years since its 80th anniversary St Martin’s has continued to serve and be served by a loyal and faithful church family: one comprising long time parishioners, newcomers ,  and an encouraging number of young families . While numbers are not  on the scale of those experienced in the 1960’s,  they’ve been more than capable  of meeting and exceeding the fund raising goal set for St Martin’s as part of the Diocese five year  GIFT campaign that concludes in 2016.

In the grand scheme of things St Martin’s  as a house of  Christian worship  is about  more than its bricks,  its mortar or  its overhead wooden  beams shaped in the ribs of a boat. It is the spirit of congregations past, present and yet to come that  matters most. The accoutrements adorning  the altar and spaces within St Martin’s  offer silent testament and ongoing tribute to that ageless spirit.

In recent decades  St Martin’s, along with  Anglican churches and those of other Christian denominations throughout parts of  the country  have borne witness to many changes— prime among them the reality of  aging congregations and declining church going numbers.  This is not to sound a note of dismay so much as it is a call to adjust to changing times and needs with deeper faith and openness.  In the coming years St Martin’s can be counted on to remain loyal to its deep roots and prepared to embrace the future with steadfast trust in God’s grace and enduring wisdom.